Michel and I had a bit of a roller coaster week last week.  Michel continued to make strides in Physio and Occupational Therapy but his medical team expressed some concerns to him about his scheduled release date.  Michel had contracted an infection near his toes on the top of his right affected foot that had caused a lot of pain and issues in performing his physiotherapy routines.  As soon as he was started on a course of antibiotics, double Tylenol and Lyrica before bed, his pain subsided and the toe has begun to heal.  Physiotherapy was able to happen again towards the end of the week.  Michel experienced a landmark feat of walking with a walker through the physiotherapy room and into a good part of the hallway by his room.  YAY!

With the concerns of his care team being heard and also the plans and equipment that we have put into place at home, it was agreed that Michel could come home this weekend for a visit.  It would also give us the chance to trial what it would be like when Michel came home full time.  It was lovely being able to spend uninterrupted time together.  I loved being able to do some cooking in my kitchen for Michel as well.  My kitchen hasn't had much love lately with sharing my time between work and the hospital. While things went well they did not go as smoothly as we had hoped.  Our new apartment does cause a few challenges with a too narrow doorway to the bathroom and to the bedroom for his wheelchair to enter.  This meant that Michel had to rely on his walker to do longer transports between bed and chair. We had rented a commode which ended up being needed as getting into the bathroom was not ideal as well. This weekend illustrated the challenges that day to day life on our own would consist of at this point in Michel's recovery.

This morning we had a good discussion about the pros and cons of insisting on keeping Michel's current release date or taking the offer of more time in convalescent care. We have decided that Michel should take advantage of the opportunity to grow even stronger before he comes home. It's been a hard decision but we both think it is the best one.  Michel will continue to be at the Elizabeth Bruyere Continuing Care Rehabilitation ward until a place at The Perley in Ottawa opens up for him. At that point he will be able to have physio and occupational therapy there and also be part of the Out Patient rehabilitation unit at Elizabeth Bruyere. We will continue to do weekend visits home during this time. As soon as he feels that he is ready he will be able to come home and continue the Out Patient therapy.

It helps to be a practicing Stoic in these moments. At first I was filled with the emotions wanting the long weeks of loneliness to be over for both of us.  Soon though our reason kicked in with the understanding that it is just too easy for Michel to be seriously hurt when he is not yet physically strong enough to deal with our home setup. We need to focus on how much improvement he has already had and keep working towards the goal of him coming home set up for success. 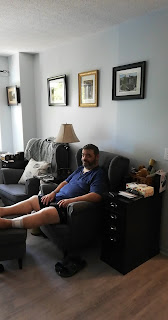 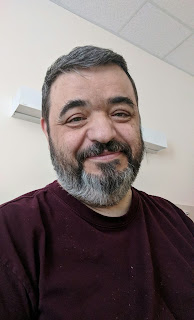 10 days until homecoming! Michel and I are counting the days now until he comes home.

I have had some conversations with his care team and they are going to ensure that everything is in place for his home coming and that I have the information that I need to ensure he has all of the equipment that is needed.

Michel had some breakthroughs this week with his mobility.  He is now able to transfer on his own from wheelchair to bed, stand up for quite awhile and is more awake now during the day.  He has also started working on climbing stairs and was able to walk with a walker for the first time!  He still has 7 more days of inpatient physio to continue to progress on this.  He will also be set up for outpatient physio and occupational therapy when he comes home.  He will also have neuropsychic therapy to sharpen his thinking and get him back to work as soon as he can.

Posted by StoicWoman at 6:29 AM No comments:

Another busy week has passed.  Michel has been working on becoming more self sufficient and autonomous and accommodating for his right side weakness.  His new release date is July 24th! A whole five days earlier than his initial discharge date.

I was able to shoot some footage of Michel standing and practising weight transference this Friday but I was asked to no longer take footage or pictures in the physiotherapy room.  I missed him pushing the cart and walking with assistance that I wanted to film for the kids.  I am amazed at how much stronger he is on his feet and am so proud of how hard he is working. It's the toughest fight he has fought yet but I will be there every step of the way in any way that I can.

At the end of Three Weeks

Well it has been a busy week of hard work for Michel ending in a Statutory holiday weekend, Canada Day.

Michel was able to graduate to only needing one person's help on a chair/bed or bed/chair transfer.

He also lost another 5 lbs. and is down 105 lbs from his highest weight.

His biggest victory this week happened while I was on a client call on Friday. He walked across the physiotherapy room floor. He had help placing his right foot down each step but he made it. A huge milestone on the journey back to independence.

On the home front we have achieved air conditioning in our apartment.  Our son-in-law Joshua was a godsend and helped me get two portable upright conditioners bought and installed. The temperatures are creeping into the 30's C and regulating temperature will be important once Michel comes home at the end of July.

We are now three weeks down with four more weeks left. 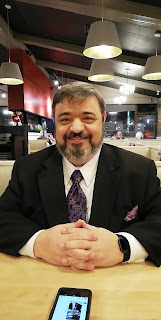 So tomorrow marks the two week point that Michel has been at the rehabilitation hospital.  He has made so much progress! He can move his forearm, hand and fingers.  He can lift his knee and foot and bear weight on his right.  He can stand for 5 minutes.  He no longer needs the lift to transfer from his bed to wheelchair and back.  He is becoming so much stronger.

I am so thankful for all of the staff that are so caring and motivating and are helping Michel get his life back.  I am posting a few pictures below.

This was our early celebration of father's day with Michel, before our daughter and her fiancée went on their honeymoon that they were unable to postpone.  Their wedding was supposed to be June 1st but they were able to postpone until August 17th so Michel would be there. 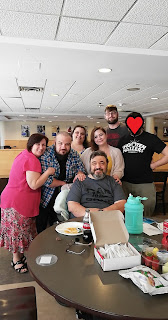 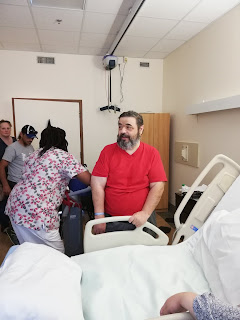 Michel is now able to stand and just hold onto the bed rail for stability. We were able to have an outing outside in the sunshine today and it was wonderful to sit together outside. 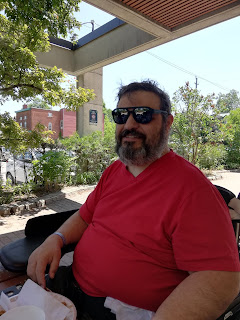 Life is awesome.  Be thankful for every blessing.

The day to day

Yesterday was one week that Michel has been at the Elizabeth Bruyere hospital in their Rehabilitation program.  I cannot say enough about the wonderful people who are working with Michel to help him regain functions and rewrite the parts of his brain that have been damaged.

I am so inspired by Michel's determination to come back from this. He is determined that he will be able to walk and use his right arm and leg again. Each day he sees a little bit more sensation and function return.  His biggest challenge at the moment is to be able to comfortably stay in his wheelchair for longer periods.  His stamina wears out at about 90 minutes currently.  They are working on trying to get a more comfortable chair setup for him and will rent a chair for him if necessary.

His return to home date is July 29th. Six weeks to go and 13 weeks from when the stroke happened. When it is closer to his return date we will need to have a look at his returned functions so that we can have things in place for him at home.  Until then we will take each day at a time and continue to work with the arm, hand, leg and foot and get them as close to "normal" function as we can.  My work is in supporting Michel, being with him as much as possible.  He has the toughest work ahead, rewriting his brain and pushing through the fatigue that hits him at multiple times during the day. He needs to continue the work needed to forge those new pathways to freedom from a wheelchair.
Posted by StoicWoman at 4:13 AM 1 comment:

The goal is in Sight

So Michel has had a busy first three days in the rehab hospital. Today he was given his discharge date. He will be coming home on July 29th at 10:00 a.m.  I will be so happy to have him home again! It will be 19 days before Emilie's wedding day.  We will see what the next 46 days bring in his progress.

We will also have to come up with any necessary plans for getting our home ready to accommodate his needs.  Everything is doable.  I am feeling extremely thankful.